Lee Ungno in his twenties Lee Ungno in Jeonju in his thirties Cover of Oriental Painting Techniques & Its Appreciation, written in 1956 by Lee Ungno

In 1922, Lee Ungno began studying painting under Kim Gyujin (nicknamed Haegang), a literati painter prominent in Korea from the late nineteenth to the early twentieth century. In 1924, Lee made his debut with the painting Blue Bamboo, which was selected for the third Joseon Art Exhibition.

In 1935, Lee sailed to Japan, where he joined the Denko Painting Workshop, run by Matsubayashi Keigetsu, one of the foremost Nanga School artists of the twentieth century. He also studied nihonga and Western painting techniques at the Kawabata Painting School and Hongo Painting Studio, respectively. Then, in 1945, he returned to Seoul and co-founded the art collective Danku in partnership with other young artists, including Jang Woosung, Lee Yutae, and Kim Young-ki. Together, they aimed to revive Korean art, breaking away from Japanese influence. The paintings Lee produced during this period, such as Drunken Night and Street Girls, suggested a modern form of Korean painting.

In addition to his work as an artist, Lee was a devoted teacher. He opened Goam Studio in Seoul to teach painting, and he lectured regularly at Hong-ik University and the Seorabol University of Art. In 1956, he wrote the book Oriental Painting Techniques & Its Appreciation, which contained the principal techniques of Eastern painting. He emphasized drawing or painting based on the painter’s own vision of an object or landscape, as opposed to copying the conventional idealized formats of traditional painting. In the 1950s, he began to produce semi-abstract or abstract paintings.

Lee’s paintings from the 1950s 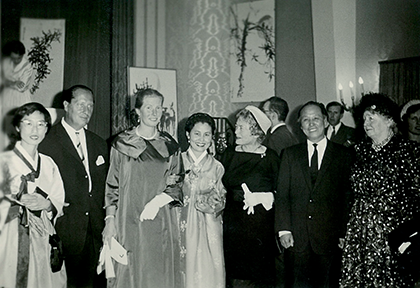 From Lee’s first solo exhibition at the Galerie Facchetti, in Paris

French art critic Jacques Lassaigne asked Lee to visit France in 1956, and in 1958, at the age of 51, Lee departed for Paris. A year later, he travelled to Germany and stayed there for a year, holding solo shows and duo exhibitions with his wife, Park Inkyung, in parts of Germany such as Bonne, Frankfurt, and Cologne. During this period, Lee developed a new painting style, which he came to call ‘semi-abstraction.’ After their one-year stay, the couple returned to Paris and were struck by Art Informel, a major art movement in France famous for its rejection of conventional painting style. Lee combined the unidiomatic language of Art Informel with traditional ink brushworks to create a new style of abstract painting suffused with Eastern sentiments. In 1962, he made a contract with the Galerie Facchetti, which backed Art Informel artists. Lee’s first solo show at the gallery, entitled ‘Lee Ungno: Collage,’ displayed a large series of abstract works made using collage techniques. The exhibition was received favourably by many local critics, many of whom, including Jacques Lassaigne, were in attendance. Subsequently, Lee displayed his work at more than fifty solo or group exhibitions around the world in countries such as Germany, the United States, Switzerland, Italy, Denmark, Belgium, Greece, the United Kingdom, and Japan. 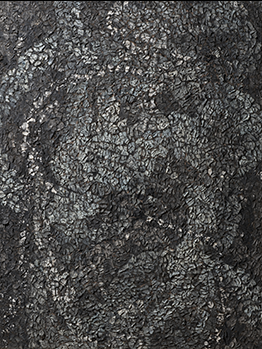 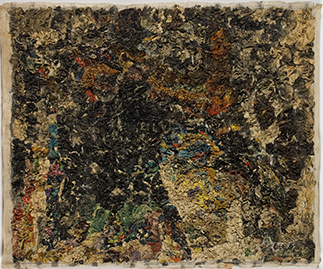 The Academy of Oriental Painting in Paris 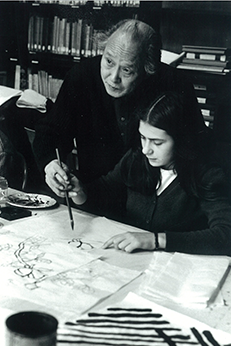 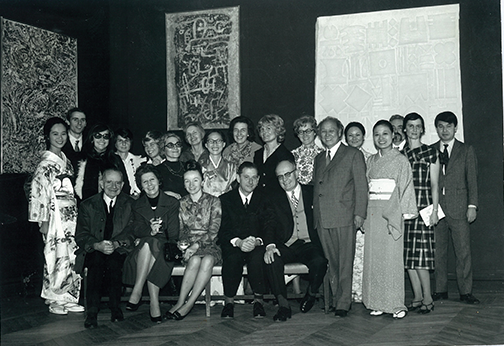 Lee and others at the opening event of an exhibition of works by students from the Academy of Oriental Painting in Paris, 1971

Paintings from Lee’s Abstract Letter series, produced in the 1960s 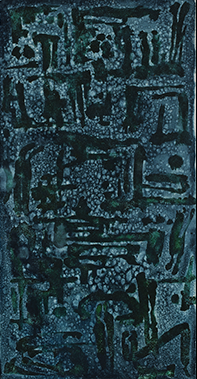 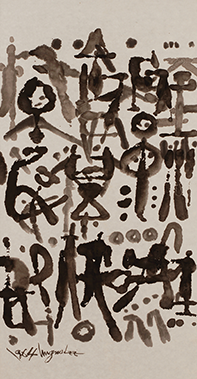 Lee with family and acquaintances at his studio 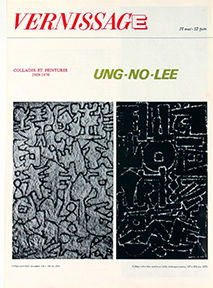 Poster for Lee’s first solo show at the Galerie Facchetti, 1971 In 1967, Lee Ungno was recalled to Korea and imprisoned for two and a half years for his involvement in the East Berlin Affair. During his imprisonment, Lee worked continuously, and the number of his works rose above three hundred. After his release in 1969, Lee returned to France and created a series of prints Offset, and, in 1970, participated in an opening exhibition of the Sables Museum in Barcarés, displaying an enormous tower sculpture placed on a beach. In addition, Lee was commissioned by the Mobilier National in Paris to produce designs for tapestries, and he collaborated with the National Manufacture in Sèvres. In the first half of the 1970s, Lee refined his Abstract Letter series while holding solo or group exhibitions in the UK, Italy, Belgium, and the US. Lee’s Abstract Letter paintings from this period emphasized the angular and architectural structure of a written letter over the smooth strokes associated with calligraphy. 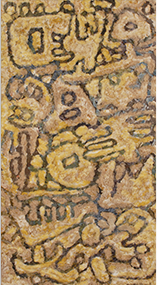 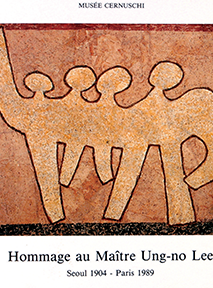 Catalogue cover for an exhibition in tribute to Lee Ungno, held at the Museum Cernuschi, 1989 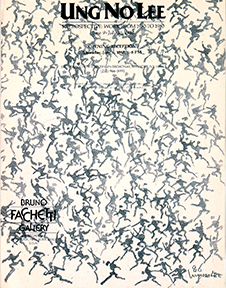 Catalogue cover for a retrospective of Lee Ungno, held at the Galerie Bruno Facchetti, New York, 1988

The human form played a key role in Lee Ungno’s works. His representation of it evolved throughout his career, in combination with his calligraphic brushworks: During the 1960s, it was expressed as part of nature; during the 1970s, it was transformed into a letter-like form. Lee’s People series, produced from 1980 until his death in 1989, was the highlight of Lee’s artistic career, expressing his philosophies of life and art. In January, 1989, Lee died of a heart attack shortly before the opening of his retrospective at the Hoam Art Gallery in Seoul. He was buried in Père Lachaise Cemetery. Tribute exhibitions for Lee Ungno were held in a number of cities, including Paris, New York, Tokyo, and Osaka. His works are held in the collections of the world’s finest museums, including the Museum of Modern Art in New York, Pompidou in Paris, the National Museum of Decorative Art in France, as well as other galleries in Switzerland, Denmark, Italy, the UK, Taiwan, and Japan.