The History Of The Collection

In February, 2004, Daejeon Metropolitan City and Park Inkyung, the widow of Lee Ungno, signed the first donation agreement for the establishment of the Lee Ungno Museum in Daejeon. Under the agreement, 106 of Lee Ungno's artworks were presented to Daejeon in October, 2005, including several pieces from the artist’s most famous series, Abstract Letter and People. A second donation, made in December, 2006, added to the collection 101 paintings that Lee Ungno created while in prison. 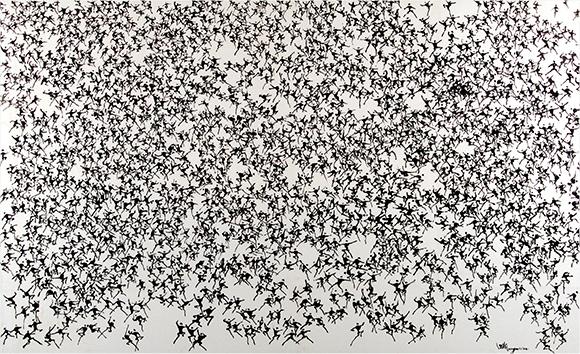 In May, 2007, the Lee Ungno Museum in Daejeon was opened to the public. The museum's first exhibition showcased all the works acquired through the first and second donations, as well as some purchased works. In the same year, the Museum took charge of preserving Lee Ungno’s 10-sided folding screen, which had previously been held in preservation by the Cultural Heritage Administration of Korea. In November, 2008, an additional 308 works, including a set of drawings titled ‘I Ching: 64 Hexagrams’ and Lee's illustrations for an unpublished book by a French author on The Travels of Marco Polo were donated as well. In March of the following year, three more pieces from Lee's Abstract Letter series were presented to the museum, and in September, 2011, a landscape painted in 1950 and a large print work, People, were donated as well. Between 2007 and 2011, during which time the Lee Ungno Museum was run by the city government, the total number of works that the Museum acquired through donation, purchase, and in taking charge of preservation, reached 533. 811 new acquisitions have been made the museum's affiliation with the Daejeon Goam Arts and Culture Foundation.

Since the establishment of the Goam Foundation, the Museum has expanded its efforts both in holding exhibitions and seminars and in publishing, working to become a world-class artist’s museum. As a result, the museum's collection has grown significantly. From Park Inkyung, now Honorary Director of the Lee Ungno Museum, a total of 689 works were presented to the Museum. These include 342 prints and original wood reliefs for printing donated in November, 2011; eighty of which were painted by Lee while in prison; 322 other works donated in January, 2013, including landscapes, literati paintings, and paintings from the Abstract Letter series, all of which were produced during the 1970s, as well as eighty paintings made by Lee in the 1960s, while he was in prison; and twenty-five artworks and other articles of Lee Ungno donated in July, 2013, in order to exhibit in the show ‘Lee Ungno: Painting the Time Throughout the World.’ In 2015, an additional ninety-five works, including sixty-six sculptural pieces by Lee Ungno were donated, enabling the Museum to hold ‘The Sculpture of Lee Ungno: Moving Into Space’, the first exhibition illuminating the three-dimensional works of Lee Ungno to be held in Korea. The exhibition brought Lee Ungno's sculptures to the attention of many art historians and critics.

Donations have been made not only by Madam Park Inkyung but also by a number of Lee Ungno’s relatives and acquaintances. In July, 2010, Ha Jung-woong, Honorary Director of the Gwangju Museum of Art, presented a wood sculpture made by Lee Ungno. Seo Seng-wan, a relative of Lee Ungno, presented an eight-faceted folding screen depicting ten traditional symbols of longevity. Madam Arlette Braine, an acquaintance of the artist, donated a painting made by Lee during the 1960s. Also, most recently, in August, 2016, Gilbert Huguenin, Director of the Galerie Numaga in Switzerland, presented to the museum a painting made by Lee in 1965 that he had long preserved himself. Thanks to their active donations, the Museum has been able to achieve a deeper and more perfect understanding of the career of Lee Ungno.

In addition to donated works, the Museum has made thirty-four purchases in extending its collection, and holds an annual meeting to consider further museum acquisitions and to continue arranging for the long-term preservation of the collection.

To conclude, the Lee Ungno Museum has, as of September, 2016, made 1,344 acquisitions that include artworks, relics, and related documents, since 2007. 1,309 of these pieces were presented through ten donations made by Park Inkyung.