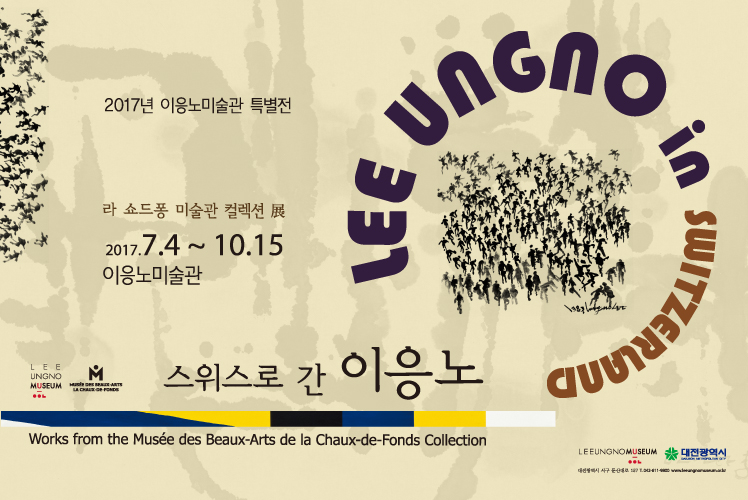 Featuring a selection of abstract paintings from the Musée des beaux-arts de La Chaux-de-Fonds Collection, this exhibition marks the 10th anniversary of the Lee Ungno Museum. Of the twenty-four pieces from the Musée, seven are works produced by Lee Ungno. The Musée, whose collection includes eight works by Lee Ungno, has presented him twice: first in 1963, and again in 1978. Accordingly, the show highlights the work Lee produced during those two decades, and 17 pieces of European abstracts from the Musée is a reflection of the art world of Switzerland at that time. During his career, Lee was featured often in Europe, in the UK, Italy, Germany, and, most frequently, France. His activities in Switzerland, however, are relatively unknown.

As such, Lee’s appearance and place in the Swiss art world requires further review. Lee first emerged in the Swiss art scene in 1963, participating in the international art exhibition Galeries Pilotes, held at the Cantonal Museum of Fine Arts in Lausanne. Following this debut, his works appeared in a number of Swiss cities, such as St. Gallen, Neuchâtel, Zürich, and La Chaux-de-Fonds. During this time, Lee was introduced to Paul Seylaz, director of the Musée des beaux-arts de La Chaux-de-Fonds, by Paul Facchetti, a French art dealer and proponent of art informel. Seylaz, who was endeavouring to increase the prevalence of abstract art in the Swiss art world, was immediately struck by the novelty of Lee’s abstract painting. Lee would go on to be featured in two Musée exhibitions.

The Musée des beaux-arts de La Chaux-de-Fonds was founded in 1864 as a public museum in La Chaux-de-Fonds, the international capital of watchmaking. Its collection includes many important works of Swiss and other European artists. The Musée initially focused on presenting the work of Swiss artists. However, since the 1950’s, under the curatorship of Paul Seylaz, the museum took on the project of introducing new international art trends to the Swiss art scene. Seylaz curated exhibitions and expanded the museum collection, highlighting, among other things, the new avant-gardist work of many European artists. It was during this time that Lee’s works were added to the collection.

The first Musée exhibition featuring Lee’s was held from January 19 to February 17, 1963. Alongside the work of Manuel Rivera and Richard Mortensen, twenty-three paintings from Lee’s Collage and Abstract Letter series were displayed. As in Paris, Lee’s extraordinary interpretation of art informel received some acclaim in the Swiss art world. The second exhibition, held from December 2, 1978, to January 21, 1979, presented fifty-one of Lee’s works, including thirty-two calligraphic pieces. In the show, Seylaz talked about the similarities of aesthetic between Chinese calligraphy and European Informalism, as manifest in the abstract quality of Lee’s ink brushworks. In 1984, Club 44, a culture club in downtown La Chaux-de-Fonds, exhibited works from Lee’s People series. Meanwhile, Galerie Numaga in Neuchâtel held Lee Ungno solo shows in 1964, 1967, 1969, and 1971. Gilbert Huguenin, director of Galerie Numaga, after seeing Lee’s works at Galerie Pacchetti, Zürich, and being introduced to the artist by Seylaz, agreed to provide Lee with a workspace.

Lee’s activities in Switzerland were recorded in various written forms. This exhibition brings together materials documenting his activities in a number of Swiss cities from 1962 to 1984. Reviews of his works and introductory writings on them (published in newspapers, pamphlets, etc.) help us understand how Lee’s art was received in Switzerland. Along with this archival display, seventeen abstract paintings chosen from the Musée des beaux-arts de La Chaux-de-Fonds, all of which were produced by artists in France, Italy and Switzerland during the 1950’s and 1970’s, are here presented. These works provide context for the theater of European art in which Lee worked, and they also cast light on the unique modern qualities of Lee’s art. The paintings of Georges Mathieu and Giuseppe Capogrossi, in particular, show brushworks recalling Lee’s calligraphic abstraction, giving evidence of the internationality and universality of Lee aesthetics.

Lee’s frequent appearance in the Swiss art world at the time is of manifold interest to us today. In his work from the 1960’s and 1970’s, Lee’s particular style of modernity was already inherent; it can be called a kind of altermodernism, something reflective of but different from the aesthetics of Western modernism. The European art scene brought together people from around the world, and in this atmosphere, Lee pursued his goal to achieve modernity in his own terms, drawing upon the Korean art tradition, rather than simply adopting Western conventions. Europe at the time was fertile ground for work such as this. This exhibition is an opportunity to retrace the steps he left in Switzerland, and to consider what came after. It also provides a new perspective on the work of Lee Ungno beyond the space of France.