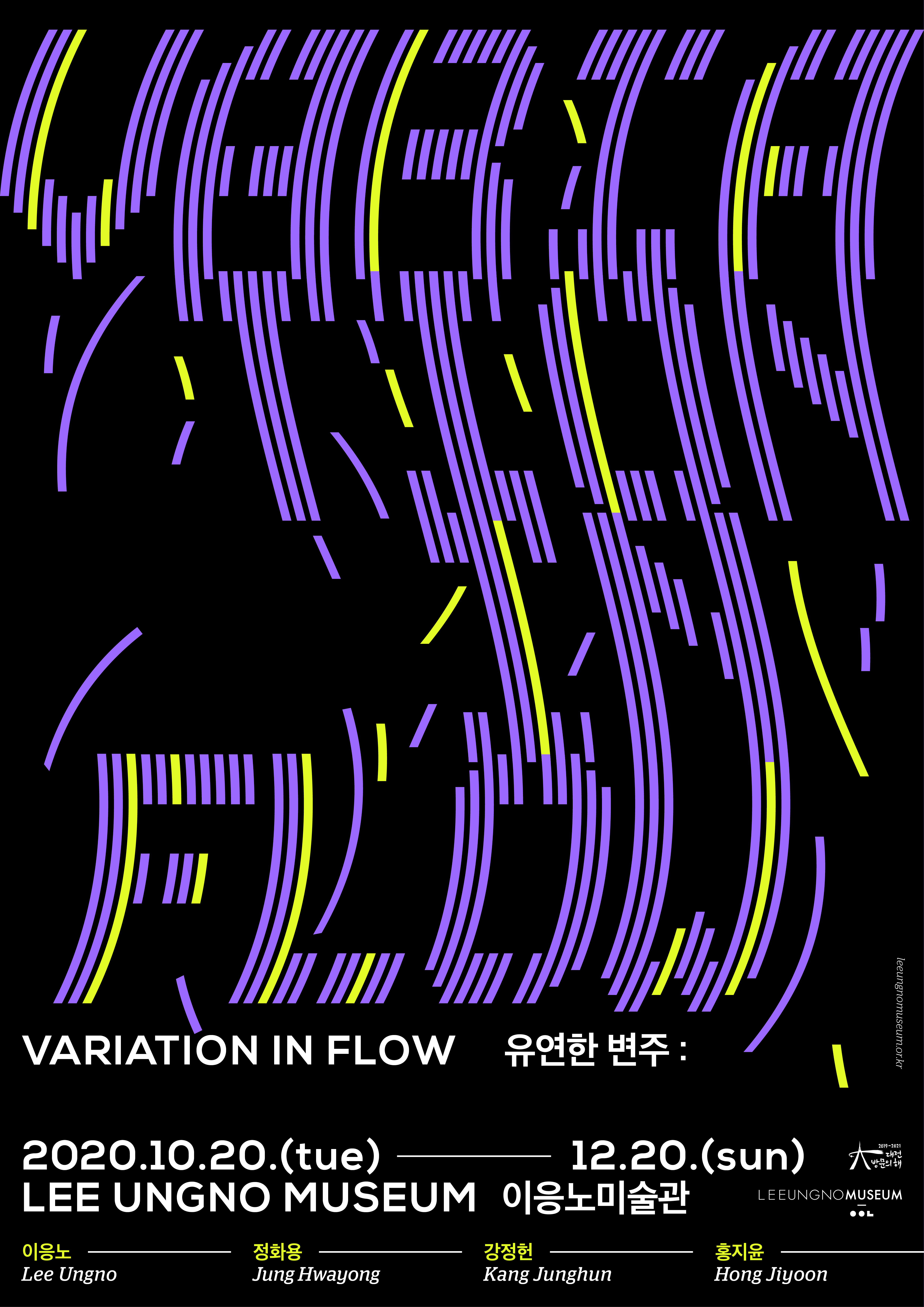 The exhibition, Variation in Flow began with an experimental idea to empathize and engage with the artistic heritage of Lee through today's art. This fall, Leeungno Museum will showcase Lee Ungno, White Night and Light, a media façade, wherein images and videos will be showcased through a projection mapping on the museum’s façade. The museum shall feature the three artists it has selected, Hwayong Jung, Junghun Kang, and Jiyoon Hong. Variation in Flow will take a deeper look at these three artists’ art, to transcend time and connect their work with Lee Ungno’s artistic heritage.

This exhibition does not merely juxtapose Lee and the three artists’ works side by side, but attempts to break down the walls between the present and the past, and create a scene in which different forms of art interact and engage with each other beyond generations and genres. Here, Lee’s art can serve as a window through which the works of the three modern artists can be viewed. On the other hand, the works of the three artists, each with their own uniqueness and originality, will help us look back on the legacy of the past and gauge what may lie ahead in the future. Although Lee and the three contemporary artists are different from each other and have not interacted with one another, they share a similar passion for aesthetic experimentation and creation of new ideas. Finding similarities in their works will intrigue the minds of people who will be visiting Variation in Flow.

Jung adds the movements and gestures of people from the real world to the digital world, and conjure the memories of childhood into reality to create a new fantasy space, where the real world and virtual reality fuse together using digital technology. The space, a fusion of the digital world and the real world, will give audiences something to contemplate on a new cyberspace, which is to come in the future and will seamlessly blend with reality. In a digital fantasy, people may exist in the form of “pixels”, as depicted in the works of Kang. While Lee’s works picture joy, anger, sorrow, and pleasure in our lives through large groups of human figures, Kang features ordinary, day-to-day life through the act of walking and using minute objects such as pixels to metaphorically bring people to life in the digital era. Perhaps the art of Lee, who experimented on western abstract art with oriental tools such as paper, brushes, and inkstick, shares a common sentiment with Hong’s “fusion oriental art”. At the core of Hong’s art lies eastern meditation and senses. However, she mixes immiscible elements together, such as oriental inkstick with acrylic paints, painting with digital animation, and letters with illustration to venture down a new path for modern oriental painting and to advance beyond tradition.

Entering the 20th century, Modern art has evolved by creating new styles and forms. Modern art progressed as it engaged with other forms of art, while simultaneously resisting the art of others and experimenting new ways of expression.The messages conveyed by the art of these three artists would invite you to envisage art in the future or the relationship between traditional and contemporary art. Their messages would naturally lead you to the innovativeness of Lee, who was at the forefront of Korean modernist art. Journeying through paintings, films, and complex installations at Variation in Flow, audiences will experience the beauty of seeing a variation of flow that arises from the dialogues among works from very different worlds.